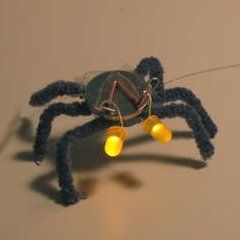 Blinkybugs are simple little electro-mechanical insects that respond to movement, wind, and vibrations by blinking their LED (light-emitting diode) eyes.  Despite their simplicity, they have a strangely lifelike quality.

Skills learned by the girls we studied: